‘NEW PIE THINKING’ BY SCOTLAND’S NATIONAL CHEF TO PUT ST. ANDREW’S DAY BACK ON THE MENU

Scotland’s National Chef Gary Maclean has created a special ‘St Andrew’s Pie’ as part of a campaign to put St. Andrew’s Day back on the menu across the country and transform the overlooked occasion into a major event.

The former MasterChef – The Professionals Winner created the signature pie, which combines Scotch beef and haggis, as part of the ongoing campaign led by Glasgow’s Kestrel Brewing Co. to revitalise Scotland’s National Day.

Like haggis, neeps and tatties on Burns Night, Maclean hopes the St. Andrew’s Pie will become the signature dish at the heart of revitalised celebrations for Scotland’s National Day across the country’s homes, bars and restaurants.

The St. Andrew’s Pie (full recipe below) takes around 1 hour to prepare and is the star of a three-course St Andrew’s Day menu designed by Maclean. The starter is a one-pan winter veggie dish with roasted Scottish roots, kale, pearl barley with pickled shallots, while the dessert is a simple-to-make custard tart with bramble sorbet.

Kestrel estimates that Scotland’s supermarkets and local retailers alongside beleaguered pubs, bars and restaurants could be missing out on turnover of up to £40 million by not creating more of a celebratory occasion on St. Andrew’s Day.

Currently the day is dwarfed in comparison to both Burns Night and traditional Hogmanay celebrations in Scotland and to St Patrick’s Day, believed to generate around annual 58.3m euros for the Irish economy and attract a spend of $5.14 billion annually in the US.

“Burns Night has haggis, tatties and neeps. It’s time for our National Day to have its own dish,” said Maclean. “I love a good steak pie, but I wanted to make it even more Scottish, so decided to add haggis which brings a real depth of flavour, without it overtaking the dish. It’s easy, comforting, and a great winter dish that people can gather around at the table at home or in a pub or restaurant. In these tough times, it’s more important than ever that we all get together. St. Andrew’s Day is a great time to celebrate both our friends and family but also our Scottish heritage. It’s time we had a celebration worthy of our patron saint and I hope this St. Andrew’s Pie can help.”

Nigel McNally, CEO of the Kestrel Brewing Co., said: “St. Andrew’s Day generally slips by as a bit of a non-event which is a great shame for a very proud nation, but also a missed opportunity for everyone to come together and express how wonderful modern-day Scotland is and what it means to be Scottish.”

“We asked Gary to come up with something authentically Scottish that would be easy to prepare, but special enough to live up to the occasion and he’s done it with typical spirt and passion. We think it’s an absolute winner,” he said.

The Kestrel Brewing Co has launched a programme of special St. Andrew’s Day promotions and deals backed by a nationwide marketing campaign to elevate the focus on the country’s National Day. Partnerships are in place with ASDA, a range of Scottish independent and convenience stores and in the on-trade with select outlets across the Scottish pub estate.

The 80s icon lager – a finalist in this year’s Scottish Beer Awards – now comes in 5%, 7% and 9% ABV variants and is shortly to be relaunched in both new look cans and on draught. 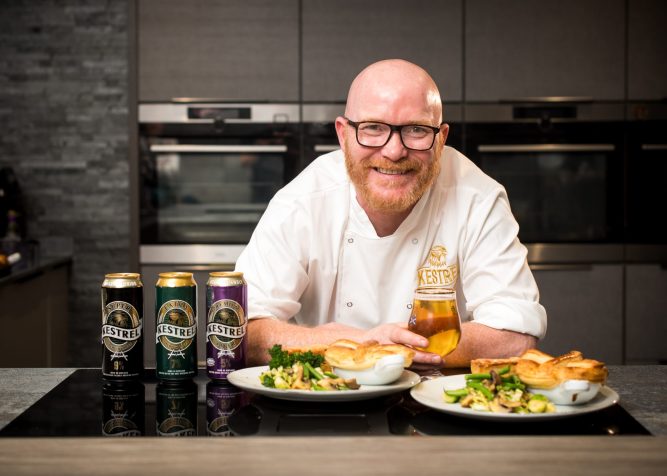